The historian got to turn an interior crank which released water at Silver Lake, Dayton, Virginia, which started the early 20th century red wheel to turn. The water flowed towards Cooks Creek, which drained towards the North River and eventually the South Fork of the Shenandoah River, which reached the Potomac River and Chesapeake Bay eventually. This mill was burned by Union soldiers during the Civil War and rebuilt after the war. As with the water which bubbles forth from the Silver Lake springs and ends up in the Atlantic Ocean, so our lives are interconnected and flow into the future in sometimes unknown and winding directions. 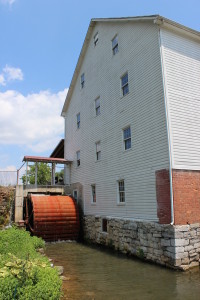