A silver globe towers over the north side of Columbus Circle, Manhattan Island, New York City.  Columbus Circle, on the southwest corner of Central Park and located along the famous Broadway avenue in New York, is the reference point from which all official distances from New York are measured.  The controversy over Columbus’ legacy notwithstanding, the journeys of Columbus across the Atlantic in the 15th century became a reference point for the modern era. 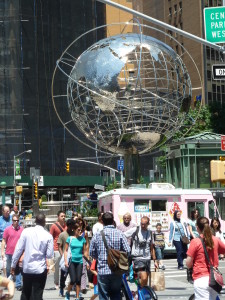