Friends took a hike on the newly developed Bluestone Trail in Harrisonburg, Virginia.  The trail is a function of the city of Harrisonburg and the sprawling and growing comprehensive university that dominates the landscape in the friendly city.  Hikers and bikers shared the trail on a sunny day, which all revolved around the fourth president’s namesake school, an outstanding institution in the heart of the Shenandoah Valley of Virginia. 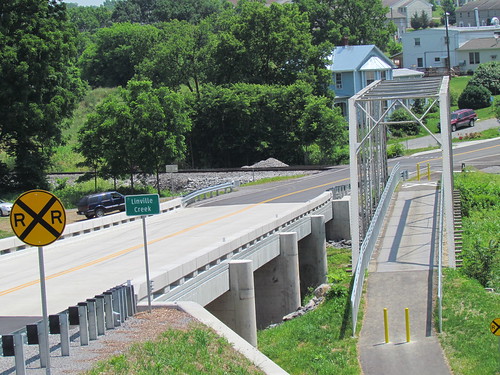 Mennonites in the Northern District of Virginia Mennonite Conference often used this old iron bridge to head west towards mission stations in the West Virginia highlands. Today a modern bridge over the steady Linville Creek reduces the 1898 bridge to a foot and bike path. The old bridge in Broadway, Virginia, is on the National Register of Historic Places in Virginia. 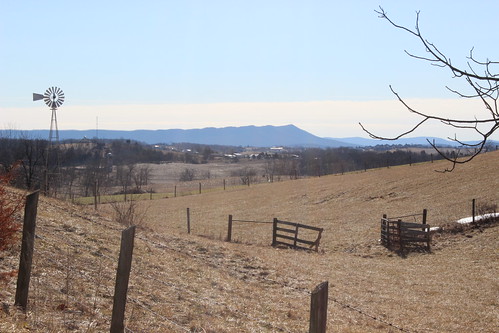 On a trip from Singers Glen, Virginia, to Harrisonburg, Virginia, the historian spotted this grand view of the Massanutten Mountain. On his trips to Harrisonburg, musician Joseph Funk probably paused to relish in the ancient beauty of the distant mountain peak. Perhaps it was inspiration for his printing and musical work in the valley.

Mole Hill rises out of the horizon (left middle) when viewed from the western region of Rockingham County, Virginia, January, 2014.  Mennonite farms, along with others in the region dot the winter landscape in the distance beyond a Saturday morning funeral that brought a thunderstorm to the attenders.

In the late 17th century Amish began migrating from Europe to Philadelphia, PA, and eventually moved west to Lancaster County, PA.  From there they migrated west to Ohio and other states.  In Lancaster County, the Amish maintain their agricultural way of of life, in spite of rapid urbanization and modernity all around them.  They are the fastest growing religious group in North America.  This Amish farm is in Smoketown, Lancaster County, PA. 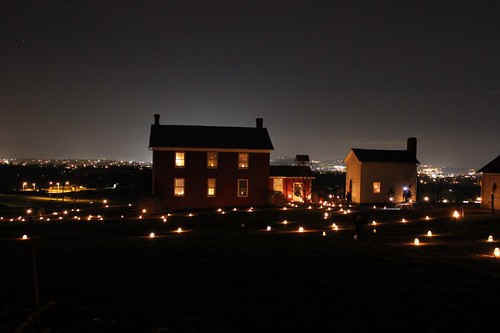 Christmas on a cold December evening at the historic 1854 Burkholder-Myers house in Harrisonburg, Virginia, with twenty-first century lights and a football field in the distance. Martin and Rebecca Burkholder would find it a challenge to recognize their own house.

Mennonites migrated into the Shenandoah Valley as early as the 1730s, though not until after the Revolutionary War did the trickle turn into a steady migration from points north.  Most 18th century Mennonites farmed, whereas in the twentieth century many diversified their economic pursuits into other areas of work.  The farming heritage in the western part of Rockingham County near Clover Hill, Virginia, with the Allegheny Mountains as a backdrop, is still strong and deep.