Trissels Mennonite Church, Broadway, Va., held a tree-planting event at the end of its three-day bicentennial celebration. I was privileged to speak on October 21 and at the tree-planting Sunday, October 23, 2022. Here’s a link to a video of my short speech.

It was fun to lead a tour in the Broadway, Va., community on September 11, 2022, with five stops. One of the stops was the historic Rhodes family cemetery, with burials from the early 1800s.

Mennonites migrated into the Shenandoah Valley as early as the 1730s, though not until after the Revolutionary War did the trickle turn into a steady migration from points north.  Most 18th century Mennonites farmed, whereas in the twentieth century many diversified their economic pursuits into other areas of work.  The farming heritage in the western part of Rockingham County near Clover Hill, Virginia, with the Allegheny Mountains as a backdrop, is still strong and deep. 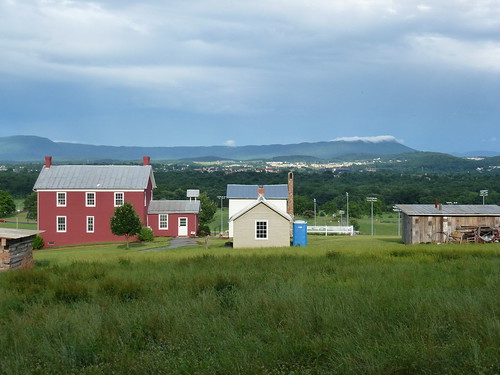 Burkholder house with Massanutten Mountain 2013, a photo by MennoniteArchivesofVirginia on Flickr.

On a crisp July Sunday evening after a thunderstorm erupted across the Shenandoah Valley, a group gathered in the Cove schoolhouse at the CrossRoads Heritage center to listen to stories about 19th century Martin Burkholder documents.  “Grace is a treasure,” Burkholder wrote in 1853, a fitting description for any era, including ours today.