In the late 17th century Amish began migrating from Europe to Philadelphia, PA, and eventually moved west to Lancaster County, PA.  From there they migrated west to Ohio and other states.  In Lancaster County, the Amish maintain their agricultural way of of life, in spite of rapid urbanization and modernity all around them.  They are the fastest growing religious group in North America.  This Amish farm is in Smoketown, Lancaster County, PA. 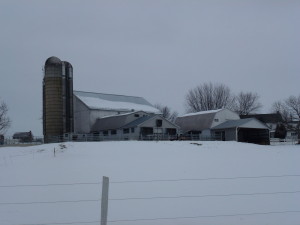