Recently the Historian visited the site where Northern Officer John Meigs died during the Civil War.  His death nearly caused the burning of Dayton, but it did result in many barns and other structures being burned by Union troops in the surrounding area.  Meigs’ marker is one evidence that remains of the terrible burnning of over 400 barns, over 30 mills and around 30 houses by Union forces during the Valley Campaign of 1864, in the Shenandoah Valley of Virginia. 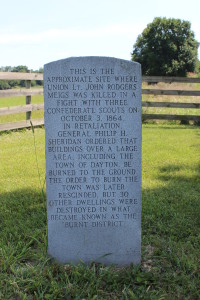